NASHVILLE – Senator Bill Frist, chairman and founder of the State Collaborative on Reforming Education (SCORE), announced today a leadership transition at the nonprofit advocacy organization to ensure a decade of progress in Tennessee student achievement is supported and extended far into the future.

Beginning January 1, 2019, Executive Chair and CEO Jamie Woodson, who has led the organization since 2011 and during the state’s historic gains in student achievement, will at her request move into a role as senior adviser to SCORE. Current SCORE President David Mansouri will succeed her as president and CEO.

“Since our founding, SCORE has always functioned as a highly collaborative team of committed leaders and educators who lean into the challenging but critical work of supporting the continued growth and achievement of all Tennessee students,” Senator Frist said. “For the past eight years, Jamie Woodson has been a remarkable and innovative leader, not only for our organization but for a broad network of stakeholders in helping create the environment for unprecedented student and school success all across our state.”

During Woodson’s leadership at SCORE, Tennessee became the fastest-improving state for student achievement, and the organization has been considered a national leader in student-focused policy and advocacy. SCORE dramatically increased its initiatives and projects, launching the SCORE Prize, which has celebrated and elevated high-performing schools and districts, creating the Tennessee Educator Fellowship, which has served more than 185 teacher-leaders, supporting the LIFT Education network of student-centered district leaders, and convening stakeholders to explore how to continue advancing student achievement.

“Throughout this period, David Mansouri has served as Jamie’s right hand and has led much of that work, so our board unanimously selected David to succeed Jamie,” Frist said. “No one is better prepared than David to lead the organization going forward and to help accelerate the work in making Tennessee’s students the very best in the nation. And in the best of both worlds – we are blessed that Jamie will continue to support the organization as senior adviser.”

“In 2011, it was the right time for me to transition my public service responsibilities in the Tennessee State Senate and my role of Senate Speaker Pro Tempore to a new type of service at SCORE totally focused on advancing education and student success in our great state,” Woodson said. “And these past eight years have been such a pleasure and so rewarding. Now the timing is right for a new leader who will build on all we have worked so hard to create together and to continue to further SCORE’s mission. David Mansouri is the best possible choice as SCORE’s next leader.”

Mansouri first joined SCORE in 2010 and has since served in multiple roles leading advocacy, communications, and outreach efforts, as well as policy and research. Since 2014, he has served on SCORE’s executive team, where he led the implementation of SCORE’s strategic plan, directing all programs and initiatives, as well as overseeing the organization’s financial and operational efforts.

“I am so grateful to Senator Frist, Jamie Woodson, and our board of directors for this opportunity to continue to serve Tennessee’s students,” Mansouri said. “Jamie has been my mentor in this work for the last eight years, and I look forward  to sustaining the tremendous impact she has led at SCORE. With the many changes in state leadership, this is a great time to take stock of how far we’ve come, how much work there is still left to do, and to assess how we can accelerate our momentum in education as a state. I am excited to work with our team, and thousands of educators and partners all across our state, in continuing to serve Tennessee’s students and families.”

Mansouri previously worked in political consulting and public relations, providing clients and candidates with public affairs consulting, issue advocacy support, and campaign and communications strategy. Earlier, he worked for the late U.S. Senator Fred Thompson. After attending public schools in Tennessee, Mansouri earned a BA from Rice University, and later received an MBA with honors from the Owen Graduate School of Management at Vanderbilt University. He is a founding board member of Nashville Classical Charter School, was a member of the Class IV cohort of Leadership Tennessee, and is currently a Pahara-Aspen Fellow, a fellowship which seeks to strengthen and sustain diverse, high potential leaders who are reimagining public education.

The Complete Tennessee Leadership Institute unites education leaders from across the state in work to increase student access and success in postsecondary education. Nominations are now open! https://t.co/PHKzOl9hcQ #CollegeCompletion 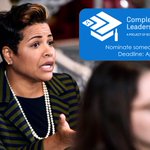 Teachers, students, parents ... everyone is learning to adapt during the coronavirus outbreak. Check out these stories from SCORE #EdFellows who are switching things up to support students: Since school has been closed for COVID-19, SCORE's Kim James has been juggling work along with managing “The James Academy of Education.” With a dose of humor and a dash of optimism, Kim shares her story on the SCORE Blog: #WorkAtHome #LearnAtHome A parent of three working at home during the COVID-19 outbreak says balance, patience, and flexibility are key to making it all work.