Posted on November 13, 2019 by Shaundraya Hersey

When I initially began the process of relocating to Tennessee, I was hesitant about placing my child in a school in the state. I had been a teacher in my home state of Mississippi for the previous five years, and I didn’t know if my daughter would get a better education in Tennessee than students in my home state. I was very tempted to settle in an area just across the state line and stick with what I knew. Although I was moving to the region to teach in Tennessee’s largest school district, I was not sure if I wanted my daughter to join me on this journey into the unknown.

Luckily for me, I still had time to sort out this crucial decision. At the time of our move, my daughter was still a year away from entering kindergarten. So, I took that year to talk with friends and colleagues and conduct some research to learn more about the district where I would be teaching as well as more about the educational opportunities available in the state.

From my research, I learned that innovative things were happening in education in the district where I would teach and throughout Tennessee. From multi-measure teacher evaluation systems to teacher mentorship programs that allowed novice educators to receive hands on training from their peers, significant efforts were being made to ensure Tennessee educators were improving their practice each year. I also learned that academic expectations for students were being raised and that young learners were being taught to become independent thinkers. I discovered that personalized learning programs were being used by schools in my district to challenge and support students, and that rigorous academic standards were being used to teach students complex concepts.

A Community Commitment To Education

The most compelling thing I learned about education in Tennessee, however, was that the state had begun to prioritize issues related to improving academic outcomes and student learning. There were daily calls for change and improvement on local media outlets, and it was hard for anyone to ignore the state’s full throttle campaign for change. Those interested in improving education were not just teachers, school district leaders, and state department officials; they were parents, community leaders, business leaders, policymakers, and average citizens. This was comforting to me, because I understood that it often takes the efforts of an entire community or even a whole state to create a lasting and meaningful impact. Knowing that there were so many people in Tennessee committed to making the state a great place for teaching and learning eased my worries.

So, after a year of research, I enrolled my daughter in a school in the district where I taught. I knew she would be supported as a young learner and I also knew that with so many people invested in improving education in Tennessee, our state would continue to work toward ensuring that my daughter and all students would have access to excellent educational opportunities. It is now five years later, and my daughter has attended school in two different school districts in Tennessee. She has had multiple opportunities to be challenged academically and countless chances to showcase her abilities. I have watched as she has been encouraged to try new things and learn new concepts that are beyond my imagination. I have also watched as educators, policymakers, and advocates have stood firm on supporting reforms to improve schools, elevate the teaching profession, and increase student achievement.

As a parent, I have been pleased with her educational experiences. As a citizen of Tennessee, I have joined the numerous other advocates within our state who are committed to guaranteeing that all Tennessee students receive a quality K-12 education and the opportunity for postsecondary success. 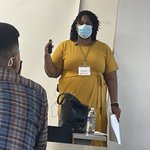