After a U.S. Senate vote of  85-12 and a U.S. House of Representatives vote of 359-64, President Obama signed the Every Student Succeeds Act (ESSA), the successor to the No Child Left Behind Act (NCLB), into law. The final version of the ESSA totals more than a thousand pages and follows years of negotiations. Senator Lamar Alexander of Tennessee, one of the key architects of the ESSA, said that restoring responsibility to states and teachers would inaugurate a new era of innovation and excellence in student achievement. The Elementary and Secondary Education Act (ESEA) was signed into law in 1965 by President Johnson. The ESEA established Title I, a federal program that provides funding to local school districts and schools with high numbers of low-income students to help ensure that all students meet challenging academic standards.

In 2002, President Bush signed into law the No Child Left Behind Act (NCLB), a major rewrite of the ESEA that received bipartisan support from Congress. NCLB established measures to close achievement gaps among historically underserved students and their peers. Some of these measures included annual testing in math and reading for students in grades 3-8, required state participation in National Assessment of Educational Progress tests for reading and math, and establishing adequate yearly progress (AYP) goals for all schools. Schools that did not meet AYP targets were subject to sanctions, including changing their governance structures or potential state takeover. Taken together, NCLB represented an expanded federal role in school accountability.

NCLB was scheduled for reauthorization in 2007, but disagreements over how to rewrite the law stalled the legislative process. In 2011, the U.S. Department of Education began offering states waivers to requirements of the law in exchange for embracing certain education policies, including adopting rigorous standards and instituting teacher evaluation systems that take into account student progress on state standardized tests.

Efforts to update and reauthorize the ESEA received greater momentum this year, with the Senate and House each passing its own version of a rewrite. After months of negotiation to resolve the differences in the bills, Senators Alexander and Patty Murray and Representatives John Kline and Bobby Scott announced in early November that they had a framework for rewriting the ESEA. Conference committee members met November 19 and approved the bipartisan compromise measure 39-1, which paved the way for the Senate and House approval of ESSA.

ESSA is a massive bill and the full impact of its many provisions is still being assessed by education advocacy groups like SCORE. The key provisions from ESSA include:

Standards: States will be required to adopt “challenging academic content standards” and aligned academic achievement standards in mathematics, reading or language arts, science, and any other subject determined by the state. States are also required to use at least three achievement levels. The legislation also prohibits the U.S. secretary of education from coercing or deterring states from picking standards

Accountability: The rewrite eliminates AYPs and replaces them with state-designed accountability systems. In measuring school performance, states must consider proficiency on annual assessments, graduation rates, and English language proficiency. Academic factors must account for “much greater weight” compared to other indicators. These non-academic indicators include measures such as student engagement, school climate and safety and postsecondary readiness. States must continue to report disaggregated data for subgroups of students. The law would require states to improve student learning in the state’s lowest performing 5 percent of schools and those with high achievement gaps, as well as high schools failing to graduate one-third or more of their students. However, the legislation does not require types of interventions, which would be left to the states to determine.

Assessment: The ESSA maintains annual testing for reading and math in grades 3-8 and once in high school, as well as science tests given three times between grades 3-12. States may pursue flexibility to develop and implement innovative assessments through a pilot program, as is the case with New Hampshire and the state’s use of performance-based assessments. The law allows states to create their own test refusal laws but maintains the requirement for 95 percent participation in tests. However, unlike under NCLB, local districts and states would get to decide what should happen in schools that miss participation targets. States would have to take low testing participation into consideration in their accountability systems.

Teacher Quality: States will no longer be required to implement a teacher evaluation system. Previously, states that received NCLB waivers were required to adopt teacher evaluation systems that used student achievement data as one of the measures. The ESSA also eliminates the “highly qualified teacher” requirement which specified that all teachers in core academic areas must be highly qualified and possess content knowledge. The ESSA requires state and LEA plans to describe how they will ensure low-income and students of color are not taught at a disproportionate rate by ineffective, out-of-field, or inexperienced teachers.

Title I Portability: The compromise legislation does not include Title I portability language, which would have allowed Title I dollars for low-income students to follow them to the public or private school of their choice. However, the Institute for Education Sciences will study the effectiveness of the Title I formula, an important addition to the literature around Title I’s effectiveness. The legislation also includes a pilot that would allow local districts to use a weighted student funding formula for Title I funds. Under such a funding model, money, rather than staff, is allocated to schools using a student-centric formula that “weights” students based on characteristics such as special education status and poverty. Metro Nashville Public School system has implemented a weighted student funding formula, also referred to as a student-based budgeting model, since 2013.

English Language Learners: The legislation moves accountability for English language proficiency from a separate system in Title III to Title I to ensure that states are focusing on the specific needs of students who are learning English.

Early Childhood Investment: The ESSA also puts into law an existing program known as Preschool Development Grants, which support states to build or enhance high-quality preschool services to children, especially for those from low- and moderate-income families. The program would be jointly administered by the Departments of Health and Human Services and Education.

ESEA waivers: The ESSA outlines the transition plan from the ESEA waivers granted by the Department of Education towards the new legislation. All ESEA waivers will expire on July 31, 2016, but states would still have to continue supporting priority schools, the lowest-performing schools, and focus schools – those with large achievement gaps – until the new ESSA plans take effect or the 2017-2018 school year, whichever comes first. By the 2017-18 school year, states must also be in compliance with their accountability systems and school improvement activities. The ESEA affirmed the right for every child to receive a high-quality education, regardless of race, income, nationality, or disability. However, several aspects of the ESSA could undermine the spirit of the law. While the ESSA requires states to identify and intervene in schools that are performing at the bottom 5 percent, it provides no guidelines for interventions that help raise student achievement, except to say that the interventions must be evidence-based. The ESSA also defers to states in creating accountability systems, which could lead to varying levels of accountability across states.

The ESSA also weakens the importance of academic factors in assessing student achievement, particularly proficiency on annual assessments. Coupled with the language around test refusal, the proposed ESEA could significantly diminish the use of standardized tests for school accountability. This approach would have major implications for students of color and low-income students since research indicates a positive relationship between school accountability and student outcomes, especially for historically underserved populations.

Teacher evaluations will also no longer be required to use student achievement data, which could affect a state’s ability to gather meaningful data about teacher quality. While student achievement data should not be the only indicator in assessing teacher performance, it is an important measure of a teacher’s effectiveness. Research indicates that students assigned to high value-add teachers are more likely to attend college, attend higher-ranked colleges, earn higher salaries, live in higher socio-economic status neighborhoods, and save more for retirement.

It is encouraging that the ESSA requires states to disaggregate subgroup data. The study on Title I’s effectiveness is also an important addition since there is some mixed evidence on its success in helping lessen disparities between low-income students and their wealthier counterparts. However, the ESSA represents a significant move towards state authority over education policy, without sufficient protections for historically underserved students. Senator Murray addressed these concerns after the Senate vote today, saying that the legislation includes strong federal guardrails to ensure all students have access to a quality education and reduces reliance on high-stakes testing. However, the diminished role of the U.S. Department of Education in providing oversight could threaten the strength of these guardrails.

Are you a policymaker who wants to improve the teacher training pipeline? A legislator who wants to give teachers a strong foundation to prepare them for the classroom? The Ed Prep Report Card has valuable information for you! #TeacherPrep

How To Use The Educator Preparation Report Card - SCORE

Learn how prospective educators, educator preparation providers, school districts, legislators, and the broader community can all benefit from using t...

“We’ll assess to see where students are and provide them the support they need to reach proficiency with grade-level expectations,” says Clint Satterfield, director of @trousdalecs. Read how how he plans to move learning forward as schools reopen. The director of Trousdale County Schools reflects on navigating the challenges of the pandemic and how to move students forward in their learning as s... 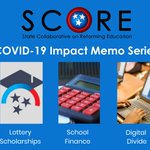