NASHVILLE – Tennesseans who are likely to vote in this year’s gubernatorial primaries identify education as their top issue in casting a ballot for governor, according to a statewide survey.

Results from the poll were released today by the State Collaborative on Reforming Education (SCORE), which commissioned a statewide survey of 500 likely voters for the 2018 Republican primary and 501 likely voters in the Democratic primary. The telephone poll was conducted December 14-17 by Fabrizio, Lee & Associates and Benenson Strategy Group.

The Republicans and Democrats surveyed were most likely to name education as the single issue that will be most important in deciding their vote for governor, with about a fifth giving that answer to an open-ended question. About one in four parent voters named education as the top issue. Education has risen in importance with voters compared with a similar survey conducted by the same polling firms for SCORE in July, which found education among the top three issues.

“In an era of intense political polarization, Democratic and Republican 2018 primary voters in Tennessee show remarkable agreement regarding the importance of education and the substantial role they want education to play in this year’s gubernatorial campaign,” pollsters Tony Fabrizio of Fabrizio, Lee & Associates and Shira Angert of Benenson Strategy Group said in a jointly written memo.

The survey also found that most voters in either party believe Tennessee high school graduates are not properly prepared for college or a job. Among Republicans, 61 percent think students are not prepared, while 56 percent of Democrats feel that way. These results are about 10 points higher for both parties since the July survey.

“SCORE regularly conducts surveys about voter views on education issues, and it is clear from the latest results that Tennessee voters understand the importance of public education, especially as providing a foundation for success after high school,” SCORE President David Mansouri said. “Voters also are eager to hear candidates for governor talk about the policies they favor for improving education in Tennessee.”

Two other issues – expanding pre-kindergarten opportunities and school choice – showed party splits, but both were favored by the majority of those polled.

There was strong agreement among a majority of Democrats and Republicans that they would be more likely to support a candidate for governor who favors:

The poll also found that about nine of ten Republicans and Democrats support annual statewide assessment. While about four in ten voters in either party say students are given too many tests, a third of Democrats and 30 percent of Republicans think students take about the right amount of tests.

The release of the poll follows a gubernatorial forum on education held Tuesday with five leading candidates from both parties and co-hosted by SCORE, Belmont University, NewsChannel 5, and the USA TODAY NETWORK-Tennessee. More than 1,200 people attended the forum, which also was televised and livestreamed.

TN is blessed to have one of the top #TeacherPrep programs in the country. We’re thankful to @MTSU College of Education for their commitment in this important area. https://t.co/WaDOmD38Pa 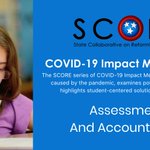